Knowing that I was also familiar with some basic web design, in my new job at Alliance Print, I was asked to build the the Alliance Print website when there was downtime in prepress, which there often was in 2008-2009, thanks to the global financial crisis.

My studio manager had already hired a designer to create a concept, so I had a photoshop file to work with. The owner of the company wanted "something to do with cogs of a press and time, and a reference to the environment and the FSC logo (Forest Stewardship Council) because he was investing heavily in renewable resources. So I put all of that together, and added my own requirement of the layout being fairly liquid for multiple desktop display sizes.

I was never given copy or much direction or feedback so the site never happened. Particularly since in 2009 I was reduced to a job-sharing situation of three days a week in response to the GFC. I stayed for three months before I got fed up with that. After I resigned, I was told that they'd hoped it would be the other guy that resigned first. Why then... ugh. 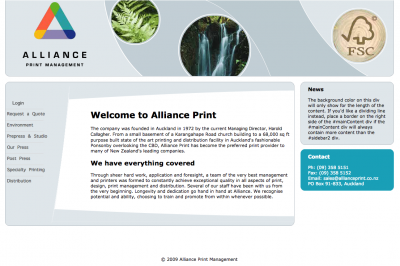