One of my colleagues is a musician in a band called the Gunsmiths. They are a blues / rock band in Auckland. I was asked if I could make a few changes to their website occasionally, add a page etc.

Part of his band also plays with other musicians under the name Motel California which is an Eagles tribute band, as that is rather lucrative apparently. They already had a domain name, but no website for Motel California. To keep it simple, they just wanted it to redirect to the Gunsmiths website. I had to clarify how these bands fitted together but once I understood, I set about sprucing the website up. The original site is in Wordpress on a cheap host, and I decided to largely keep with that. I got access to the host, and to the registrar set up the redirection, changed the php version to 7.2 (which broke the site), reinstalled wordpress and any plugins I felt they still required, and found a parallax theme and played with it until it looked okay.

There was another site that a different bandmember had attempted to set up in Wix that my colleague was originally unaware of so he got the url and asked if I could copy some of the content over. I reformatted it a bit and set the site up to load as Motel California at the top, but it eventually scrolls to The Gunsmiths.

I originally planned to code some sort of redirection to a different page depending on weather the incoming url was motelcalifornia.co.nz or thegunsmiths.co.nz, and did a few tests with the server to see if that was even detectable, but every possible solution had certain limitations or would require a lot of time and I was doing this for free (well, a trade, my colleague had a look at my guitar to make it a bit more playable) and it was the start of the Christmas holiday period and I had a bunch of my own projects to do. Which at the time of writing this I have yet to blog about. 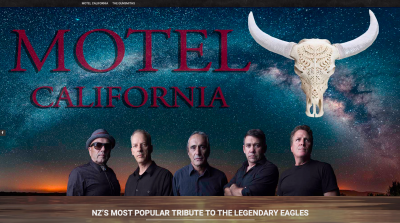