This site has gone through a few iterations. But this current version is created in Bolt CMS, using Foundation CSS for the layout and a custom extension to take care of a few site-specific features such as ad rotations and templates for different layouts. I also bought up the .nz domain and redirected .co.nz to that.

My partner Victoria became interested in the idea of the site, and wanted to write for it too which was a bonus because she had a lot of good ideas and was more politically saavy and that's where I wanted to take the newspaper in the first place.

I tired to keep the newspaper look still, but still keep it as a functional, accessible and responsive website. The images are plain black and white with a sepia filter and an overlay to mimic halftone dots. There were a few initial attempts mimicking the halftone look within the pictures themselves but they usually didn't scale well. I think the current solution is actually the best-looking one anyway.

As for content, well, we got sick of writing and it not going anywhere, we're both busy. We didn't really want to push the site onto friends on Facebook because we both find people who do that sort of thing annoying. So it sort of stagnated. I would *like* to add more content but it's just a matter of getting started again. 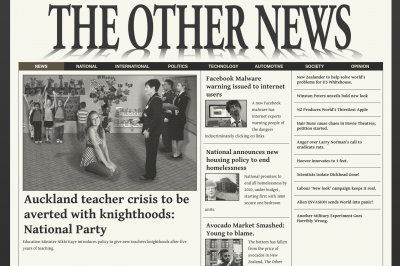