I suspect that for this first week I will post every single day because we will be doing a new exercise every day. Rest assured that I wont be posting quite so often in later weeks. On with the show.

So today through a practical exercise we learnt about the connections that make up a social network and how to visualise them in a meaningful way. But what we learnt can be applied to any kind of network and I imagine can have far reaching implications to successful design and solving of large problems. But more on that later.

In 4 groups of roughly 15 (our group had 12 members) we were given coloured post-it notes. On a set of pink notes, we wrote our names and stuck them to a wall, with physical clearance given around each name. On yellow post it notes, we wrote an answer to a simple question such as our favourite coffee, preferred operating system, most likely pet, what time we woke up this morning, and so on. These notes were then stuck around our name with yellow wool connecting each answer back to our name. 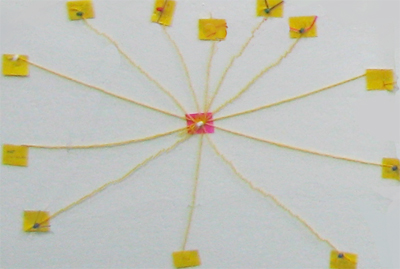 Like so. Then we threaded different wool through common answers, so for everyone that answered for example "Trim Mocha" for their favourite type of coffee, wool would connect those common answers. Except nobody answered Trim Mocha. Except me. Moving on... 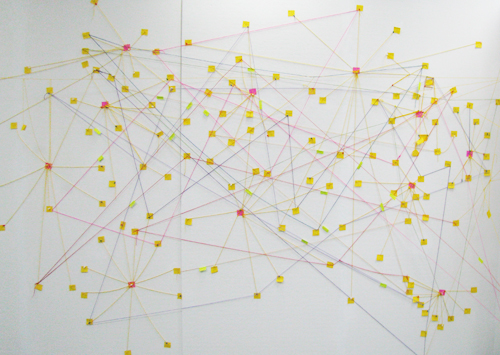 Similar groups of answers were called classes. When I first heard this I thought "aahhh, this is a way of teaching us the concepts of object-oriented programming" as later on we will be introduced to Java. But, it wasn't at all, so ignore that.

Playtime over using this information we were able to enter the raw data into a program called Gephi. Gephi is a program for visualising data and allows people to see underlying structures to networks, in this case a social network. 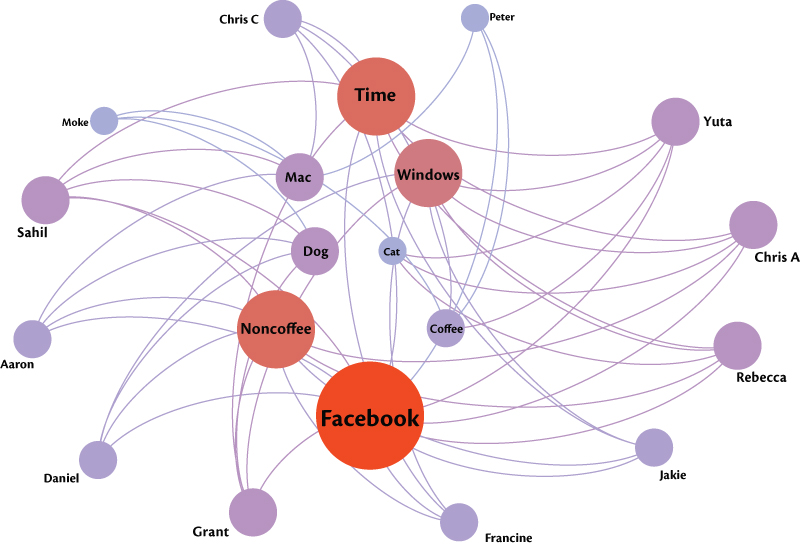 This is the result. Mark Zuckerberg would be pleased, it clearly demonstrates that facebook is the hub of social networking. At least in our case. Then again it also says more people dislike coffee than like coffee. It also says I prefer macs which I object to, I have no OS preference. They both can do equally stupid things.

We also watched a BBC documentary called Connected: The Power of Six Degrees, that explains the science of networks, in particular social networks. However, the principals can be applied to any kind of network, such as traffic congestion, biological networks in the body, computer networks and the internet. One interesting example in the video is the mapping of human diseases to each other by the genes they have in common. This helps researchers find other genes diseases may have that they have not yet discovered. I can imagine that it could also help researchers identify certain weaknesses in the human body a bit better. But this is probably taking off to a tangent from  the main lesson today, which is how we're all connected in various ways, but more connected in some ways than others, and those larger connections are called hubs. Hubs are the best place to start if you want spread a virus or a nasty rumour or what not... Not that I recommend either course of action.

I took some video footage of the day but I've run out of time and it wasn't that great anyway. There is something wrong with my battery, it went flat way too fast so the camera was consequently tied to the wall most of the session. Oh and the time lapse function is terrible it turns out. Better to just shoot and select frames in post production... There must be an easy way to do that surely!

First day, a short intro to the semester and a bit of homework - set up a blog... Tada!

This is my first exploration of blogging myself, no doubt I’ll be tweaking the design and layout over time and possibly change the name and bio information.

I hope to make this utterly readable and enjoyable to all, not just those that have to review it or those that are familiar with the course that I’m doing or the concepts and projects that I will be dealing with in the future.

Blogs have to be readable and interesting, and I enjoy communicating ideas, especially complex ones in a way that is easily accessible to all people. If you can’t relay an idea, it’s either not very good, not developed, or you don’t understand it much yourself.

Read the bio and about links of this blog to see what on earth it has been created for.